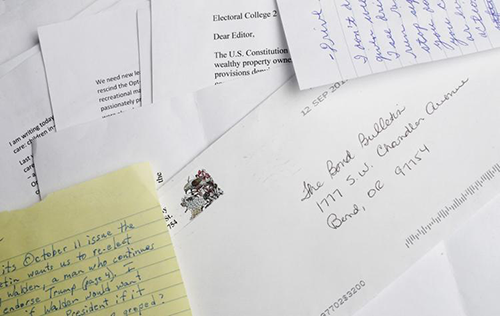 I appreciate the July 29 front page article that held a spotlight on the lonely and vulnerable in our long-term care communities. This is indeed a challenging time for residents of these communities as well as for their families.

I have a family member who has been living in a long-term care community since mid February. We’re very fortunate that there has been no known COVID case and we’re able to get out outdoors with a full array of PPE.

Residents of long-term care communities are still engaged in daily activities, have their three meals a day sourced, prepared and served and their medical status is checked each day. I’d additionally like our community to put a supportive spotlight on the people who are living alone in their homes.

According to a 2017 Population Reference Bureau survey, 42% of those 65-plus are living alone. In that number are people who are lonely and vulnerable and have no support system.

They may live in our neighborhood. They may need groceries, medications or simply a conversation. When you’re thinking about what to do with the extra time that COVID restrictions have gifted you, consider reaching out to a neighbor.

If you have children, make it a family affair. Whether it’s doing some shopping, talking on the front steps, delivering a fresh fruit or vegetable or leaving a note, it can make a difference in their life and yours.

Rather than differ 30 years of other local government tax money to jump-start the Core Area, the city of Bend could buy a sizable chunk of the core and move all City Hall functions to it. The land acquisition would of course need to be large enough to support at least 30 years of future city administrative growth and have a sizable council chamber adequate to meet the ever-growing need.

With adequate transit and parking to the chambers, when not in use, it could be rented as a large meeting/convention center.

To pay for the land acquisition and relocation of City Hall, the city could sell all downtown facilities for redevelopment. This would also get these valuable downtown properties back on the tax roll.

With such a large “investment” by the city in the Core Area, other businesses would become more attracted to relocation and capital improvements (without the need for an urban renewal district).

Not all pilots have deep pockets

The city of Bend has raised airport rents, as The Bulletin reported on Sunday. It was covered pretty well. But what was not covered was the way the City Council rubber stamped the increase.

During the budget meeting not one council member asked why the budget line times pertaining to the airport were completely out of proportion with everything else. At a time when governments everywhere are going out of their way to help us get over this economic hump, the City Council took a different route and imposed onerous increases on a select group. Contrary to the facts, I guess they think anyone connected with aviation has deep pockets.

It is politicians and groups on the left who have declared war on America! They continue to allow criminals to go free, to encourage nightly protests in cities across the country in the midst of the COVID-19 pandemic and to demand the defunding of local police forces while mayors order law enforcement officers to “stand down” and watch as cities are burned and businesses looted and destroyed.

There is a war going on. It is a war on America and on our values, but it is not being perpetrated by President Trump.

Look no further than the left progressives and socialists who support and fund groups like BLM and ANTIFA who are the real instigators.