The meaning of the Pledge 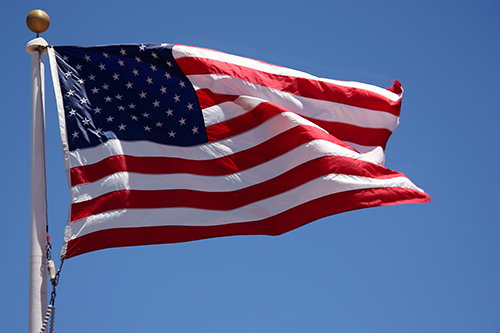 We need the police. America’s Jews and Christians appear to be failing the biggest test of their lives so far. The seriousness of your religion is being tested. Will we look back on this time and wonder how we, especially our religious leaders, could have failed in times of moral crisis? It is clear by our actions that religion does not have much impact on our lives When tested, it often fails.

America is being taken over by violence, destruction, stealing with little or no protection from our government.

What about the seventh commandment and others?

What about free speech? Our press, schools, internet media and almost every major business have caved. Yet all we get from American religious leaders on this matter is silence.

We are the freest, least racist, most opportunity country in the world.

So what use is religion? Do we not believe in Martin Luther King’s words, measure people not by “the color of their skin but by the content of their character.”

If Christians and Jews fail this test, we will not only lose our freedom, but the great American experiment. We are now at the point of no return. But let’s return this country to a great rival.

What are we as Christians afraid of? Is it being shunned by our “friends” on Facebook more than we fear our Creator?

Support our police departments to focus on dealing with the “bad guys” in non lethal ways.  One-fifth of their work week be spent on such exercises in Jujitsu and unions weeding out the bad cops. The good cops far outweigh them. We need our police.

This morning, thoughts of an ironic situation regarding the use of masks during COVID 19 came upon me. I believe it was, during the earliest history of the formation of our Republic, Patrick Henry said, "Give me liberty, or give me death!" Well, those who think they have a right to not wear a mask are helping to give either them or people near them, DEATH. Interesting times, these days.

How far will this go?

With every news cycle there are more and more incidents involving attacks on the founding of this country. Occupation zones, anarchy, removal and burning of flags, encroachment into religious freedom, threats of and actual name changes such as military bases, and buildings at the U of O. Removal and destruction of statues is occurring on a much more frequent basis. It started with Columbus, then confederate generals. That has now spilled over to our founding fathers with the destruction of George Washington’s statue in Portland. Pioneer statues have also come down. Ulysses Grant is gone. Teddy Roosevelt and other more recent historical figures are now ones are being targeted. Since Washington and Roosevelt have already been in the sights of the radicals, watch out Mt. Rushmore. A friend, with tongue in cheek, suggested that we change all the portraits on our currency.

If the trend continues I can see the following scenario. We will have to change the names of Mt. Jefferson, Mt. Washington and Mt. Adams. Names of anything connected with the early explorers such as Lewis and Clark, Vancouver, Fremont and others. The name of the State of Washington has to go as well as Washington D.C. Might as well scrap Astoria, as Astor obviously plundered the territory in search of furs. The Columbia River has to be renamed as it was named in honor of Christopher Columbus. I’m sure anyone that has any knowledge of history can come up with a whole list of “insensitive” place names and objects just in the Pacific Northwest. The challenge will be finding new names that everyone can agree on. It’s going to be a difficult task, as there will surely be groups that will be offended no matter what names are selected.

The beat goes on so buckle up. It’s going to be a long hard ride.

The meaning of the pledge

In an article on June 26, we were told that Bend City Councilor Gena Goodman-Campbell chose to sit during the Pledge of Allegiance to show her support for the protesters who were demanding racial equity in Bend. I have a big problem when one of our elected leaders shows a complete lack of patriotism, especially near the 4th of July when we celebrate the founding of this country. It's a small gesture, to stand with hand on heart, to pledge our support for the flag and the country for which it flies. Maybe Ms. Campbell should read the pledge again, to understand how important this country is to the world. She should know that the freedoms we enjoy are rare in many parts of the world. Young people are no longer taught history and that's a shame because history is real. It can't be erased by destroying monuments or statues related to the past. Patriotism is simply respecting our history. The people who founded this country stood up to the great British Empire and all its power risking their fortunes and their very lives in the process. It was the beginning of the greatest experiment in government to ever occur. A democratic republic. People from all over the world want to come here. Most of them want to become Americans. Talk to any immigrant who has become a citizen, and you will hear heartfelt patriotism. Anyone of any race lucky enough to be born here should show some patriotism. It's the least we can do.