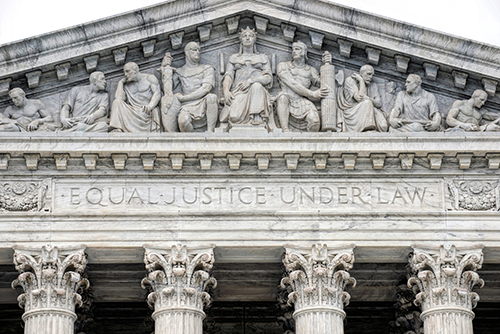 For over half a century there has been a relentless assault by the left on our republican form of government. At both the federal and state levels, republicanism has been undermined by court rulings and legislative initiatives.

In 1964, the Supreme Court, under Chief Justice Earl Warren, decided in Reynolds v. Sims (377 U.S. 533) that the Constitution’s Equal Protection Clause (Amendment XIV, Section 1) requires equal legislative representation for all citizens, even in the state senates. This ruling effectively undermined Article IV, Section 4, which states: “The United States shall guarantee to every State in this Union a Republican Form of Government.”

Until the Supreme Court decision, the senates in most states were apportioned on the basis of counties rather than populations. In Oregon there were 30 senators, roughly one per county (some counties had to share senators). In 1965, pursuant to the Supreme Court ruling, Oregon adopted the proportional rule, with the more populous 14 counties in the northwest quadrant of the state gaining a majority of the state senators (22), while the remaining 22 counties in Southern and Eastern Oregon have only 14 senators. This reapportionment dealt a fatal blow to republican government in Oregon.

As a consequence, the more rural areas of Oregon, California and Washington are significantly underrepresented, and the Democrats whose base is the metropolitan areas control the legislatures. In Oregon, this disparity in representation has resulted in a Democrat supermajority, with Republicans having little recourse or means to block Democrat legislation. What has happened in Oregon and other Democrat-controlled states is what the founders feared: the tyranny of the majority, or mob rule, wherein 51% of the voters dictate what happens to the other 49%.

Democrats, never satisfied until they gain complete control of the reins of government, want to obviate two of the last vestiges of federalism, the Electoral College and the U.S. Senate. The U.S. Senate, some argue, is not representative of the voters, since each state, no matter how small the population, has two senators.

The Electoral College, in their view, thwarts the will of the voters, especially in the most populous (and liberal) states, as exemplified by the 2000 and 2016 elections. Despite the fact that 90% of the country, geographically, voted for the Electoral College winner, what matters to Democrats is that millions of urban voters were, in their view, disenfranchised by this constitutional “impediment” which Democrat-controlled states are trying to nullify by means of a national popular vote.

Salem Democrats, aided and abetted by Gov. Kate Brown, are determined to inflict their will on the populace by whatever means necessary. As if a supermajority is not enough, they are now abrogating the Oregon Constitution by circumventing its provisions for submitting tax bills to the voters for approval. Since Measure 97 was handily rejected in 2016, they did an end around with the gross receipts tax with other tax bills to follow, e.g., cap and trade (carbon tax), all of which they are trying to safeguard from voter disapproval by making it more difficult to petition to have these bills the subjects of ballot measures.

State and national Democrats and their fellow travelers in the media, academia and Hollywood are preparing the way for mob rule under the guise of one man, one vote. They are effecting this outcome through various means — making it nearly impossible to control our borders, creating sanctuary states and cities to prevent enforcement of federal immigration laws, fostering class warfare and identity politics, manipulating election outcomes through fraudulent voting and ballot harvesting, influencing cultural attitudes via the educational system and the media and using the courts and sympathetic judges to enact changes to the law or halt Trump administration executive actions. Republican government as guaranteed by the Constitution is at risk because of these efforts. It is the responsibility of those who value our constitutional republic to resist these encroachments on our liberty.

— Paul deWitt is the chair of the Deschutes County Republicans.