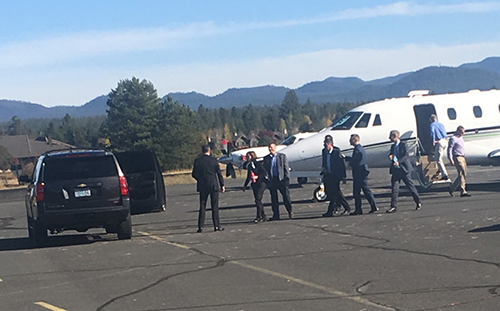 Brown’s stance as a carbon reducing advocate is questioned. Bend, OR, October 14, 2019 - On Monday afternoon, Oregon Governor Kate Brown was spotted exiting a private jet plane at the Sunriver airport. The jet trip was considered to be very surprising given Governor Brown’s strong support of HB 2020, legislation aimed at reducing carbon emissions and curbing climate change.

Brown presumably traveled less than 150 miles (the distance between Salem, OR and Sunriver, OR is 148 miles) in a private jet, instead of taking a high-gas mileage or even electric powered car. The move by Brown raised many eyebrows in Central Oregon. Brown was said to have been a speaker at a conference in Sunriver on Monday afternoon. She apparently used a jet to fly to Sunriver, speak at the conference and then fly back to Salem.

“The hypocrisy here is astounding to say the least”, said Deschutes Republicans Chair Mike Kusinska. “All summer long Kate Brown stressed the need to reduce carbon emissions and greenhouse gasses. Yet, she jet-sets around the state for her meetings? Oregonians deserve to know how often Brown uses private jets for her travels” said Kusinska. He added, “Maybe she deserves the nickname of Carbon Kate after today.”

As recently as July 2019, Governor Brown was quoted in The Oregonian, “Let me be clear, I am not backing down,” she said when referring to ensuring Oregon moves ahead on a Cap and Trade style approach to reducing carbon emissions, despite HB 2020’s failure in the legislative session.

“For many Oregonians, 150 miles is nothing. There is absolutely zero need to take a jet to travel that distance.” Kusinska added Monday afternoon.

It’s unclear how groups like Renew Oregon and Climate Solutions will react regarding Brown’s private jet travel instead of energy efficient and/or electric cars.